The dong is the official currency in Vietnam, although it arrived in different times to North Vietnam and South Vietnam, before the unification of the country.

The Vietnamese dong came in different stages to the country, first entering the North Area and then to the South.

This currency was first introduced to the country by the government of North Vietnam in 1946, replacing the piastra of the French Indochina. Two revaluations followed, one in 1951 and one in 1958.

Regarding South Vietnam in 1953 banknotes of piastras and dongs were printed and on the 22nd September 1975, after the fall of Saigon, the currency of this region was replaced by the new dong.

After the reunification of Vietnam on the 3rd May 1978, the dong also unified. The new dong equalled 1 dong of North Vietnam and 0.80 of South Vietnam. On the 14th September 1985 the dong was revaluated, equalling 10 old dongs. This event caused a cycle of inflation that would continue until the mid-nineties.

Up today, there have been five series of banknotes. Except for those of 2003, all previous series were mixed and did not have a unified design. 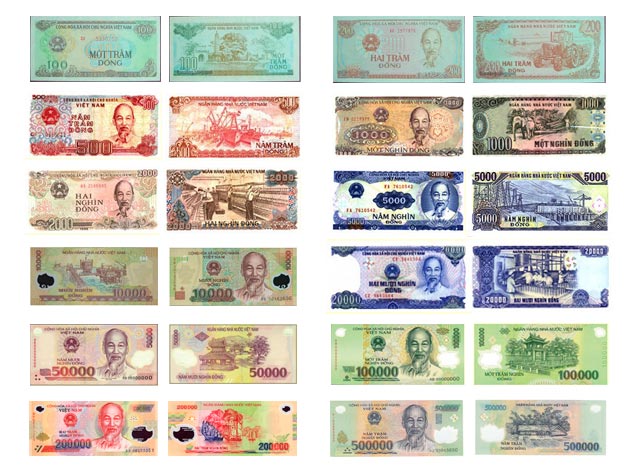 Regarding currencies, in 1978 there were aluminium coins in denominations of 1, 2 and 5 hao, dated from 1976. As a consequence of inflation, did not last very long.

Since 1986 there are commemorative coins in copper, tin, cupronickel, silver and gold. However they were never put in circulation.